"Honoring Those Who Served" 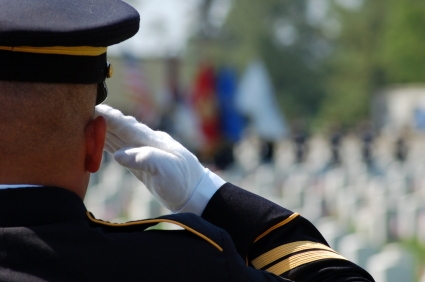 What Is The Military Funeral Honors Ceremony?

The basic Military Funeral Honors (MFH) ceremony consists of the folding and presentation of the United States flag to the veterans' family and the playing of Taps. The ceremony is performed by a funeral honors detail consisting of at least two members of the Armed Forces.

The Funeral Honors rendered to you or your veteran will be determined by the status of the veteran.  The type of Funeral Honors may be Full Military Honors, 7 Person Detail or a Standard Honors Team Detail.

At least one of the funeral honors detail will be from the Armed Force in which the deceased veteran served.  Taps may be played by a bugler or, if a bugler is not available, by using a quality recorded version. Military Funeral Honor Teams may act as Pall Bearers if requested by the veteran/family.

Who is eligible for Military Funeral Honors?

Who is not eligible for Military Funeral Honors?

How do I establish veteran eligibility?

Visit the official Veterans' Service Records web site at www.archives.gov/veterans/military-service-records/ and complete an online request with their eVetRecs system or download a form that can be mailed or faxed. Here you can obtain DD Form 214 (Report of Separation) and SF-180 (Standard Form 180)

A Presidential Memorial Certificate (PMC) is an engraved paper certificate, signed by the current President, to honor the memory of honorably discharged deceased Veterans.

The Department of Veterans Affairs (VA) furnishes upon request, at no charge to the applicant, a Government headstone or marker for the unmarked grave of any deceased eligible Veteran in any cemetery around the world, regardless of their date of death. For eligible veterans that died on or after Nov. 1, 1990 and whose grave is marked with a privately purchased headstone, the VA may also furnish a headstone or marker to supplement the graves or a Medallion to be affixed to the privately purchased headstone.

Learn more and get the forms to apply here US Department of Veterans Affairs (VA) Headstones, Markers and Medallions